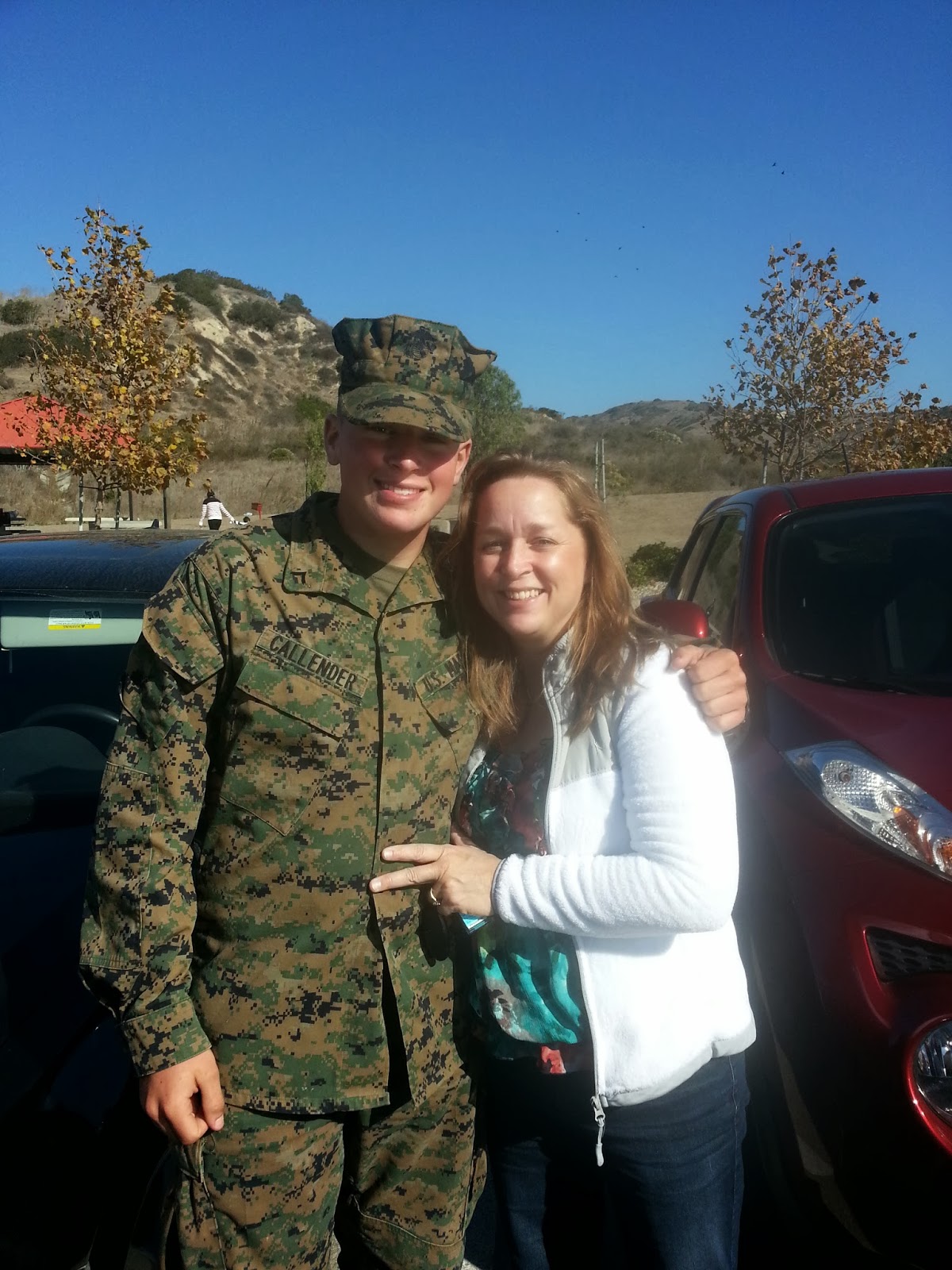 
The first hint of his decision came in a text, during my lunch break.


Me: What? Are you serious?


Me: I’m here. Processing. You broke the no texting bad news rule...btw.


David: I know. I’ll call tonight. I was hoping you would break it to dad first.


How is a mother supposed to react to an announcement like this? With pride? Fear?


As we began the discussions that would shape my son’s future I couldn’t help wondering how other parents felt. Did they try to talk their child out of it or did they immediately jump for joy? The first person who came to mind was a friend of mine, Dana*. Her son, Billy* was just a year older than mine. He enlisted in the Marine Corps while he was still in high school and shipped out to boot camp a week after graduation.


Dana exudes pride for her son’s military path. Her wardrobe consists of shirts in three colors: red, white, and blue touting sayings like, “The Only Thing Tougher Than a US Marine is Their Mom” and “Don’t Mess With Me I Raised a Marine.” Her car looks like she just drove out of a Memorial Day parade; with more stickers than bumper and an assortment of initials and dates scrawled out in soap on every window. If you were familiar with the Marines you’d be able to tell what company, platoon, and job Billy held, as well as his base and the dates he deployed and returned from Afghanistan. She is the epitome of a faithful American.


I, on the other hand, was filled with worries and fear over my son’s choice.  In all honesty, I was not thinking what he will take into his adulthood from this experience, but what it will take from him. The obvious fear is the possibility of the ultimate sacrifice; a life in exchange for our rights. Not that I don’t enjoy the rights we have. I respect and commend every person who has lived and died for our freedoms; I just never imagined my children in that role, in that danger.  That unspeakable fear aside, there are so many other worries. What if my son has to take a life? We all can relate to the scenario of taking a life to save your own, or that of your fellow soldiers and friends, but what if you are simply ordered to take lives without a clear and eminent threat? How do you process that? What if you live while other soldiers around you are killed? What does that do to a person, not the soldier trained to aim, but the person beneath the Kevlar?


All of these concerns I have voiced to my son. We had many long conversations involving ‘what if’ scenarios and I force fed him every book I could find on war. But ultimately, it was his decision to make. All I could do was make sure he was well informed when he made it. On Memorial Day he left for boot camp, six days before his twentieth birthday.


Dana showed up that morning to see him off. She was a walking billboard of encouragement with her Marines hat and a t-shirt stating “Pain is Just Weakness Leaving the Body.” I was barely able to keep my weakness intact as the recruiter’s car, carrying my son, turned the corner.  Dana and her husband were a great help to me and my family. They knew exactly what we were going through, they had been there not so long ago.


In the months that followed Dana and I talked a lot. I had known her for years, but our sons’ military paths brought us closer. Although I couldn’t help but feel that I was failing by comparison in the mom pride department. I was proud of my son’s decision to serve our country, and was growing more proud as he worked his way through the thirteen week training regimen, but couldn’t bring myself to put on a sassy shirt and cheer. My thoughts were still muddled with all of those ‘what ifs’.


Meanwhile, these fears were coming to life for Dana. A few months before David enlisted Billy’s unit was deployed to Afghanistan. At the end of their tour, while dismantling the camp, they were ambushed and two of his friends were killed. This held up their departure. When he was finally back on American soil it was not the happy homecoming that Dana had hoped and prayed for. Billy was depressed and angry and had no way to express it, so he drank.


Dana tried talking to him and urged him to seek help. She knew something was wrong, but Billy wasn’t ready to face it. All she could do was keep trying to get him to talk to her, to a friend, to anyone. What they later found was he was suffering from PTSD (Post-traumatic Stress Disorder).


The Mayo Clinic defines PTSD as a mental health condition that’s triggered by a terrifying event. Some symptoms can include flashbacks, nightmares, and severe anxiety. They have found people who seek help soon after experiencing symptoms have a better chance of recovering and a decreased chance of developing a long-term disorder.


Studies released by the United States Department of Veterans Affairs claim combat exposure as a leading cause of PTSD cases among military members and list many secondary problems that often accompany the disorder like depression, drinking or drug problems, and job or relationship problems. These can also exacerbate into physical symptoms, such as chronic pain.


The Mayo Clinic warns that symptoms can continue to worsen if untreated and can lead to thoughts of suicide or violence towards others. Seeking help at the onset of symptoms is the key to recovery. But what if military members don’t want to seek help? Dana knew her son was experiencing some of these symptoms and drinking heavily since returning home. She begged him to talk to someone. He told her it wasn’t what Marines did and that he would be fine.


The Department of Veterans Affairs reported that out of the one million troops that left active duty in Iraq and Afghanistan from 2002-2009 about half came in for VA services. Out of them 48% were diagnosed with a mental health problem, like PTSD. Their concern is for the military members that do not seek help for their symptoms. The reasons ranged from concerns of being judged as weak to feelings that therapy, in general, is ineffective.


There are also cases where military members did ask for help, but were turned away. Kathy Dobie, a reporter for The Nation wrote about such an incident involving a young Marine from New Jersey. After his second tour in Iraq Lance Corporal James Jenkins was having a hard time coping with the violence he experienced. He was involved in close range combat with enemy forces, which resulted in a tremendous loss of life, including eight Americans.


Jenkins repeatedly told his mother about his nightmares, overwhelming feelings of remorse, and uncontrollable adrenaline surges. He started gambling, because he liked the fast pace and risks involved, and it quickly became an addiction. When his money ran out he began writing bad checks to continue gambling. He was arrested twice and spent time in the brig, a military jail. He started talking about suicide. His mother tried to get help by calling his commander, but was told they had too many soldiers to worry about besides him and he was probably only using the threat of suicide to avoid getting in trouble. Instead of facing his third arrest, Jenkins deserted.


The Marines found Jenkins living in a nearby town with his fiancée. They surrounded the house, but before they could reach him he killed himself. Lance Corporal James Jenkins was 23 years old.


Dana kept pushing Billy to seek help and eventually he gave in. She jokes that she harped him into it, but the relief in her eyes is evident. Billy’s symptoms have improved and he has stopped binge drinking. Dana does not give away too many details of his therapy, which I respect, but she does say it is an ongoing process for him.


I asked Dana how she did it. How was she able to put the worry and fears aside and beam with pride for her son, the Marines, and the country even after everything they have been through? Her response was simple.


“The fear is always there. I just choose to support him by being as positive as I can.”


My son, David, is currently in advanced training to be a Fire, Crash and Rescue Technician for the Marines. I find that my pride has, for the most part, won out over my fears. I have even bought a t-shirt, although it is modest in comparison to Dana’s collection. It just says, USMC with the words Semper Fi printed underneath. I will be wearing it to my son’s graduation in May**, along with the biggest smile I can muster. As he has learned to live by the Marine code Semper Fidelis (Always Faithful), I will learn to live with the fear and all of the ‘what ifs’ because I too have a code, Semper Mater Matris (Always Mother). Not even the Marines can change that.
Posted by Kristin Callender at 9:29 AM

Kristin Callender
CT, United States
I am a mom of four children, wife of one big kid, author, daughter, sister, aunt, friend, teacher, lifelong learner, and much more...oh and of course I am a Twitterer.

There are no contests at this time.


For more details click the picture of the book above.

Just in case someone is curious about the nature of my reviews here's my disclaimer. I review books that I like and if that review helps another author find more readers, that's a bonus. Most of the books I review are given to me by the author, publisher, or a publicist involved with the books. I donate all of the books I receive to area schools and non profit groups . All other books I have bought, begged, borrowed or stolen (heh heh, from my mother). I do not accept any book on the assumption that I will provide a positive review, only that I will read it and consider it for review.